Hi… I’m the Gavin in “Gavn”action!

Its a combination of what you know and who you know that got me this gig.  I did a few years in the navy, spent some time with the army engineers and some with the mines out in the Isa before first playing on the Thin Red Line north of Cairns in 1997. I was on my way to being a star!

After some small bits in local TVC’s, I packed up house with my now wife and headed off with our backpacks on our world tour (we skipped a few places).  Once we got back to Oz, it was about finding some work and paying for our holidays!

My lucky break was running in to Dave who was working onGreen Sails at the time and got me a job. The rest they say is history and I started chasin’ film work”.  Some jobs wereInvincible’s in Sydney; Inspector gadget 2; Love of Lionel’s life; Finding hope; and, Kangaroo Jack. Lots of other things were hotting up with more and more commercials coming my way thanks to Harry introducing me to this new world of film.

So, with the conclusion of Farscape, I started to focus on TVC’s, working my way through a variety of products, both local and international. There was one job we did on Fraser Island with just crew, camping in the dunes so we could get sunset and sunrise shots.  So great as you could almost touch the whales as they swam past our camp site! 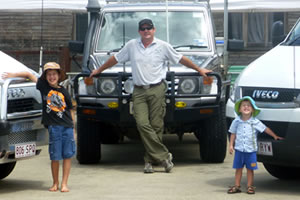 This is the resume of long form drama projects that I have facilitated over the years either as a unit manager or assistant.